Music has been central to Estonian culture for centuries. Although Estonia is one of the smallest countries in the world, it nonetheless has one of the largest collections of folk songs.

But Estonians have historically used music as a political weapon as well. It is said that song was used in protest of the German invaders of the 13th century, and also in resistance to the Russian occupation under Peter the Great in the 18th century.

In the 19th century, Estonians started a song festival tradition called Laulupidu, where choirs from around the country come together to sing for days. 25,000 to 30,000 people sing on stage at the same time. But the founding of Laulupidu was as much an expression of the desire for self-determination and independence as about song. 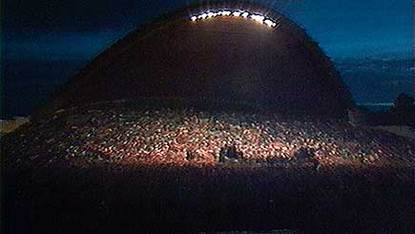 In the late 1980’s music was once again used as a unifying force when hundreds of thousands gathered to sing forbidden Estonian songs, demanding their right for self-determination from a brutal Soviet occupier.

THE SOUND OF REVOLUTION

“Mu isamaa on minu arm” had held the country’s hopes together for fifty years. During the 1980s, the songs of a new generation brought new hope to all Estonians.

Experience the sounds of revolution below:

Eestlane olen ja eestlaseks jään (Estonian I Am, and Estonian I Will Be)

Sind surmani (Until I Die)

When James Tusty, producer of The Singing Revolution, asked me if I would consider signing on as composer for the film, I had to admit my minimal knowledge of Estonia. Outside of a vague sense of Estonia being on the Baltic Sea, I knew nothing of the Estonian people’s non-violent struggle for freedom from the Soviet Union. That was to change.

As I prepared to develop musical themes by reviewing many hours of footage and rough cuts, I became engrossed in Estonia’s story, and began to form a deep respect for the people I “met” in the film. My empathetic response to the events depicted provided the foundation for my work process, and helped me to create music that would move the audience emotionally and support the meaning of the story.

Jim expressed a desire to have an epic, cinematic score that would reflect the historic significance of the revolution. He initially suggested that I use an orchestra, and although the idea was appealing, budgetary limitations prevailed; I was tasked with creating an orchestral sound by more modest means. I accomplished this by mixing the sound of a real string quartet (multi-tracked) with some sophisticated samples of string ensembles. I also recorded a real French horn, clarinet, and percussion to augment other groups in my “virtual orchestra.” The musicians were from the Boston Symphony Orchestra and other professional ensembles.

I also had to decide how to incorporate the many beautiful and stirring choral works, sung by massive choirs, that are featured in the film. Jim wisely instructed me not to use the thematic material from the choral compositions themselves, both for copyright reasons and to avoid detracting from their power. They were to stand by themselves.

My solution was to compose the score entirely as instrumental music that would complement the existing choral pieces.

I designed my score to create a sense of drama and to heighten the emotional intensity of the protests and other historical events depicted in the film. The cue entitled “Toompea” is one example of this. In it I use odd metrical units (11/8 alternating with 10/8) to enhance the chaos and tension of the attempted coup. The cue that follows, “Calm,” uses a theme that I called the “Hope Theme.” Orchestrated with piano, strings, and horn, it is intended to mirror the emotional release that participants must have felt in the aftermath of the coup attempt.

Estonia’s traditional folk song form is called regilaul. Sung primarily by women, regilaul is comprised of eight-syllable verses sung by a primary singer and typically repeated by a secondary singer or group of singers. These songs often focus on work, ballads, or legends. They are marked by alliteration, parallelism, and rich poetic and mythic language. Rhyme is typically not used.

In the 1860s, Friedrich Reinhold Kreutzwald used regilaul as the basis for the national epic poem “Kalevipoeg”. By the twentieth century, this form of music had nearly disappeared from Estonia, with vibrant traditions existing only in Setumaa and Kihnu. In the late twentieth century, musician and scholar Veljo Tormis led the movement to rediscover and preserve regilaul for future generations.

“Mu isamaa on minu arm” (Land of my Fathers, Land that I Love) was arguably the most important Estonian song during the Soviet occupation. Its lyrics come from a poem written during the “Great Awakening” by national poet Lydia Koidula. The poem was set to music for the first song festival (Laulupidu) in 1869.

The lyrics’ importance was magnified when Gustav Ernesaks set them to new music in 1947 for the first song festival allowed under Stalinist rule. The song slipped by the Soviet censors, and after two days of singing compulsory Russian songs glorifying Marx, Lenin, and Stalin, Estonians all sang “Mu isamaa on minu arm” in their native tongue, with the common and unspoken knowledge that it expressed hope for a free Estonia.

The song was not allowed on the song festival program in the 1950s. But then, in the early 1960s, Estonians started defiantly singing the song against Soviet wishes, and by 1965 it was included in the program. At the hundredth anniversary of the song festival in 1969, the choirs on stage and the audience as well started singing “Mu isamaa on minu arm” a second time in the face of stern Soviet orders to leave the stage. No one did. The Soviets ordered a military band to play and drown out the singers.

But a hundred instruments is no match for over a hundred thousand singers. The song was sung repeatedly in the face of authorities. There was nothing the Soviets could do but invite the composer on stage to conduct the choir for yet another encore and pretend they intended to allow this all along.

“Mu isamaa on minu arm” was never forbidden again. It is truly the song that united Estonia during its long occupation.

Since 1869, Estonians have held massive song festivals where more than 30,000 people have taken the stage to sing. Choirs and singers have to audition, and the end result is stunning to see and hear.

The first song festival was held as a national unification event while Estonia was under Czarist rule. Since that time, Laulupidu has been held 26 times.

Gustav Ernesaks, who composed “Mu isamaa on minu arm,” lived to see Estonia restored to independence in 1991 and died a free man in 1993.