“Imagine the scene in 'Casablanca' in which the French patrons sing 'La Marseillaise' in defiance of the Germans, then multiply its power by a factor of thousands, and you've only begun to imagine the force of 'The Singing Revolution'.”

Most people don’t think about singing when they think about revolution. But song was the weapon of choice when Estonians sought to free themselves from decades of Soviet occupation. The Singing Revolution is an inspiring account of one nation’s dramatic rebirth. It is the story of humankind’s irrepressible drive for freedom and self-determination.

“I'd pronounce this unity of the Estonian people as nothing short of extraordinary.”

The Singing Revolution shares how, between 1987 and 1991, hundreds of thousands of Estonians gathered publicly to sing forbidden patriotic songs and share protest speeches, risking their lives to proclaim their desire for independence. While violence and bloodshed was the unfortunate end result in other occupied nations of the USSR, the revolutionary songs of the Estonians anchored their struggle for freedom, which was ultimately accomplished without the loss of a single life. 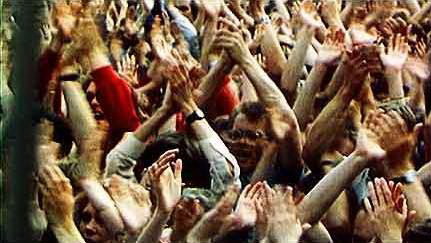 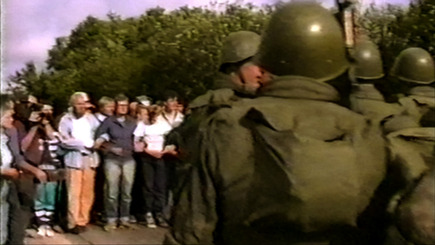 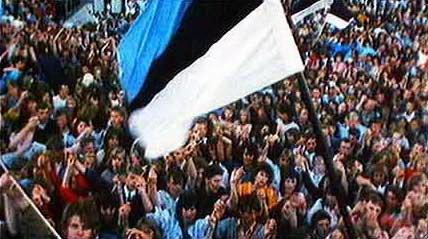 The Singing Revolution tells the moving and dramatic story of how the Estonian people peacefully regained their freedom–and helped topple an empire along the way.

The young people, without any political party, and without any politicians, just came together … not only tens of thousands but hundreds of thousands … to gather and to sing and to give this nation a new spirit,” remarks Mart Laar, a Singing Revolution leader featured in the film and the first post-Soviet Prime Minister of Estonia. “This was the idea of the Singing Revolution.

First occupied by the Soviets in 1939, then by the Nazis, and then by the Soviets again, Estonia lived through decades of terror. By the end of World War II, more than one-quarter of the population had been deported to Siberia, been executed, or had fled the country. Music sustained the Estonian people during those years, helping to maintain the Estonian language and sense of culture. It was such a crucial part of their struggle for freedom that their successful bid to re-establish their independence is known as the Singing Revolution.

The Singing Revolution film shares how, between 1987 and 1991, hundreds of thousands of Estonians gathered publicly to sing forbidden patriotic songs and share protest speeches, risking their lives to proclaim their desire for independence. 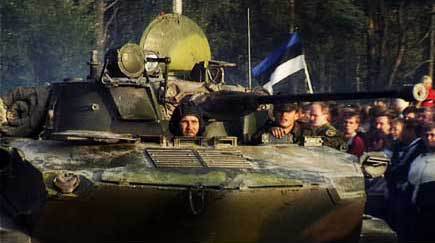 The subjugation began in Estonia in 1939 with the secret protocols of the Molotov-Ribbentrop pact between Stalin and Hitler that would ignite World War II, to the Siberian Gulag, to the oppressive control tactics of the 1980’s. Estonia ultimately would be occupied for more than 50 years. It had no army, no weapons. Estonians knew they could not gain freedom through force. They had to do it their own way, with their spirit, patience and determination.

By the late-1980’s, Mikhail Gorbachev’s attempts to salvage the empire by offering perestroika (restructuring) and glasnost (free speech) were backfiring, as Estonians saw the new policies as an opportunity. The nation was simmering with unrest. Momentum built to a crescendo in the summer of 1988 when a rock concert in the capital’s Old Town Square was stopped by Soviet authorities. “The powers in the communist party were afraid because these songs ignited the passions of the people,” recalls artist/activist Heinz Valk.

The crowd walked three miles to a traditional song festival field to continue the concert, and massive crowds gathered for six straight nights to lift hands, sway in unison, and sing illegal patriotic songs. Emboldened, Estonians brought out their old blue-black-and white flags, some from attics and basements where they had been hidden for nearly 50 years. To their own dismay, no one stopped them. For the final night these protest more than 200,000 Estonians gathered.

This was the heart of the “Singing Revolution”. The force of the human voice massed in song was the cultural catalyst that awoke, energized and united the nation of Estonia. It was a political and cultural statement that brought all Estonians together and gave them courage to rebel. After that there was no turning up. Three primary freedom movements, with radically different styles, worked both publicly and surreptitiously to push the Soviet system. A series of clever political maneuvers, combined with ever-growing singing demonstrations, overwhelmed a confused and failing Moscow.

The next few years weighed with threats and violence from the struggling Soviet empire; twenty peaceful demonstrators in Latvia and Lithuania died at the hands of Soviet soldiers and hundreds more were wounded in January of 1991. Estonians feared they were next in line.

Later that same year, on August 19, 1991, a hard-line coup toppled Gorbachev’s government in Moscow, creating chaos – as well as opportunity. The Estonian Soviet parliament united with freedom activist groups and voted unanimously to re-establish Estonia’s independence, not knowing how the coup would be resolved or what the repercussions might be. During the vote, Estonian citizens gathered at the TV tower and radio stations to link arm-in-arm in front of tanks, risking their lives to protect their main source of communication with the outside world. On August 21, 1991 the nightmare of the Soviet Union was over; and Estonia emerged – once again – a free nation.

The Singing Revolution tells the moving and dramatic story of how the Estonian people strategically, willfully, sung their way to freedom–and helped topple an empire along the way.

The Singing Revolution is the first film to tell this historically vital tale. “This is a story that has not been told outside Estonia,” said filmmaker James Tusty, who is of Estonian descent. “We felt it was time the rest of the world knew of the amazing events that happened here.”

In 1999, Tusty and his wife and co-producer Maureen lived in Tallinn, Estonia, while teaching film production at an Estonian University. The experience sparked their interest in the Singing Revolution, and in 2001 they returned to Estonia to teach and also to begin the meticulous research that would anchor their documentary.

To make the film, the Tustys interviewed more than one hundred movement leaders, Estonian statesmen, and average citizens. They also combed through archives around the world…unearthing rare, forgotten footage of life under Soviet rule. 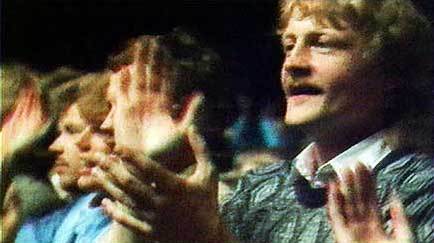 Four years in the making, The Singing Revolution is a moving, intensely human testament to the sustaining power of hope and the motivating strength of song. The film reflects the indomitable human drive for personal freedom, political independence, and self-determination.

We are often asked how it came to be that we made this film. This is the story.

Because of Jim’s family heritage, we chose to teach semester-long filmmaking courses at an Estonian university in 1999 and 2001, and that’s how it all began…

While there, we learned about the Singing Revolution. We did not learn about it all at once, but step by step, much as Estonia won its freedom—small step by small step.

By 2003, we were determined to tell this story to the rest of the world. We had found virtually no one outside the Baltics who knew of the Singing Revolution. And yet it was one of the most amazing stories we had ever heard.

Laulupidu, the Estonian song festival held every five years that features 30,000 singers on stage, was to be held in 2004.

Laulupidu played a key role in keeping hope alive during the Soviet occupation, and it was critical to capture it on film. If we missed shooting Laulupidu in 2004, the next festival wouldn’t take place until 2009. 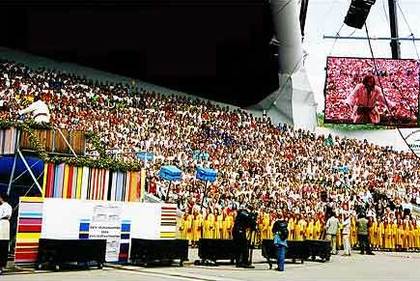 Even without any funds in place, we didn’t want to wait another five years. So we made the decision to shoot for forty days between February and July of 2004, and our film adventure was underway. We were soon assisted with our first funds from Olga and Walter Kistler, followed quickly by additional support from Steve and Karla Jurvetson.

Editing took nearly two years. The story was complicated, and we wanted to get our facts right. Our research for archival footage was also extensive. At times, lack of funding slowed us down, but we never stopped inching ahead as best as we could.

On December 1, 2006, The Singing Revolution premiered at the Black Nights Film Festival in Tallinn, Estonia. We had made the film for the rest of the world, but we could think of no better venue for our international premiere.

We were deeply touched by the fifteen-minute standing ovation the Estonian audience gave us.

Please learn about the Singing Revolution. It is not just a story about Estonia—it’s also a story about humankind’s irrepressible drive for freedom and self-determination.